5 new features in the latest version of the iPhone

Every year Apple comes out with a new iPhone, sometimes there’s a lot to talk about and sometimes there’s not. This year, Apple has made some radical changes with their latest flagship iPhone, the iPhone X. The iPhone X has brought a slew of changes, most notably: an OLED display, facial recognition technology, wireless charging, dual cameras, and an impressive new chipset.

Basically, an OLED display is capable of emitting its own light without the need for a backlight. It can reach higher contrast ratios than LCD screens. LCD screens cannot show true blacks because the light from the backlight will still come through, where as OLED screens can turn off individual pixels for true and deep blacks.

Apple didn’t only add an OLED screen to the iPhone X , however. A total redesign and overhaul of the screen technology was done. Now, Apple has tried to remove bezels completely, resulting in an edge-to-edge screen with a notch at the top and no home-button. The implementation of this technology was not all fine and dandy, however. The notch is somewhat controversial, 3D Touch has been removed, fingerprint scanning is gone, and the cost of the display has increased. This has resulted in some customers paying more for a device that has removed features that existed in previous releases of the iPhone.

The iPhone X has introduced an advanced new facial recognition technology (dubbed ‘Face ID’), it is essentially taking the place of Touch ID now that the iPhone X doesn’t support fingerprint scanning.  Face ID works in different lighting circumstances and doesn’t care if you’re wearing glasses. But, that’s not all that their new facial recognition technology is capable of. Apple has also added a new kind of emoji, called ‘Animoji’. Essentially, all it is, is emojis that move along with the facial gestures that you make; you can send them to people or let your kids play around with them. 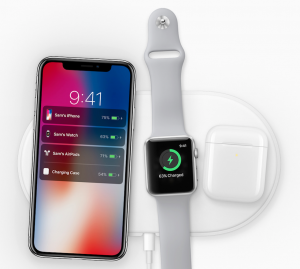 Due to the redesign and glass body of the iPhone X, it finally supports Qi wireless charging. Wireless charging has been around for a while now with Apple’s competitors, so it’s a welcome addition to their latest flagship device.

The A11 Bionic chipset is a massive upgrade when compared to Apple’s previous chipsets. It absolutely blows the competition out of the water and is a breakthrough in efficiency and performance. Benefits of the new chipset include better battery life and speed. In fact, according to Apple, it is 70 percent more energy efficient, while at the same time 25 percent and 70 percent faster, with dual core and quad core workloads respectively, than their previous A10 chipset.

Obviously, the iPhone X brings a lot of new features to the table, but is it worth sacrificing some of the older features? That’s probably why Apple decided to make an iPhone 8 along with the iPhone X; the iPhone 8 essentially retains all of the old features, while adopting the glass design and new A11 bionic chipset. One day Apple will probably figure out how to merge all of the best features into one device, but until then, customers will have to pick and choose which features they believe are most important to them.