5 New Features of the Android Pie 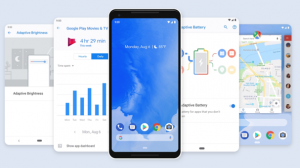 Android Pie represents a major overhaul for the OS. Android users will really notice a difference when it comes to the system’s new gesture navigation system and new user interface features.

Android Pie will slowly make its way out to eligible phones. It’s currently available for Pixel devices but will be coming soon to others. Many older phones will likely never see the update, but most recently made phones should eventually get the new features.

While Android Pie offers a host of improvements, I have picked out five to talk about. Just keep in mind these features may not be available on all Pie-running phones right away.

The little icons at the bottom of your Android screen are getting a major makeover. With Android Pie, you will see an elongated, pill-shaped icon in the bottom center that acts a new, fancier version of the home button. Swipe up from the bottom to view your recent apps. To switch apps, just swipe right on the home button.

With Android Pie, users will have the option to use only one button by enabling new gesture navigation. The home button now acts as an area where you use gestures to view recently used apps, quickly switch between them and open the app drawer.

You will also get an option to edit your screenshot, making the process even more convenient. Android Pie is adding better tools to do more with screenshots. After taking a screenshot, you’ll have the option to annotate and share it directly from the screenshot interface instead of relying on a third-party app, as it has been the past.

If you worry about spending too much time on your phone, you’re not alone. Android Pie will introduce a set of digital well-being features that helps you stay informed about your phone usage and set limits on your technology time.

Android Pie will get to know you, learn your habits, and start making useful suggestions for the ways you use your apps. App Actions predicts what you want to do with your phone and makes suggestions based on the time of day and the actions you usually take then.

Android Pie will learn which actions you commonly take with a specific app or contact and display shortcuts to quickly carry out said tasks. For example, if you normally call a relative around a specific time on a specific day, App Actions will provide a shortcut to dial the person from within the app drawer.

Battery life is always hovering around in the back of our minds, so anything that lengthens the time between charges is a welcome upgrade. Android P brings us Adaptive Battery, which prioritizes which apps get the juice based on your phone habits.

With Android Pie, your phone will learn more about how you adjust settings like display brightness, as well as when you typically use specific apps. It will tune the OS to increase battery life and overall performance.