Okay, you’ve made it! You are now a Project manager of a medium sized company that is based out of Milwaukee Wisconsin. The region your company has is in Milwaukee, Indianapolis, Chicago. The company wants to upgrade their tech departments for the latest version Samsung has to offer. Our job is to figure out a good strategy that will help the users transition smoothly to the new applications. This scenario requires us to have 57 new Samsung devices, which means 57 users are getting a brand new deceives that they may never have used before. Organization and communication are paramount in the success of this mission.
The first thing we need to do is identify a list of tasks that are required to accomplish the project. We need to:
• Document number of devices
• Create inventory of all applications installed on devices
• Create a pilot upgrade device, with the new operating system installed
• Install existing applications on to the pilot device
• Verify compatibility of the applications on the new OS
• Remediate issues with the applications (make changes to make apps work)
• Create a migration plan
• Execute migration plan
• Support devices/users that still have issues
• Close the project.
Above is a sample list of tasks that will need to be completed to have a successful upgrade.
Now it is my opinion that people can use multiple devices to connect to the existing internet. There has never been anything wrong with options. In fact, in my day to day life I have many different forms of electronic equipment that all can do pretty much the same thing. In the end, peak performance is achieved by having peak convenience. If you don’t believe me just ask McDonalds about convenience.
So, to get all this accomplished we are going to want to make a chart that shows us what needs to be done. Such as start and end dates, effort, and cost. The reason you want to make a chart is to stay organized. As you will see ether are so many crazy variables. So, crazy, in fact, that I want to limit as many as possible. The less variables the higher chance for success. Some of the variables include the device themselves. There’s so many Samsung devices out there it would make your head spin. There’s different features in each line as well. Not only that but there are also many different colors available for each type of Tablet. Next comes the hard drive and storage space. There’s difference capacity that you can have. For the sake of this project I am going to make it as simple as possible and pick the best, most versatile tablet on the market today, that will cover every single 57 employees that needs one. Not only for convince sake but if they are all the same tablet, it makes the upgrade much smoother. Instead of 57 different devices with different quirks. We have the same exact device that needs the same exact software uploaded to it-57 times. 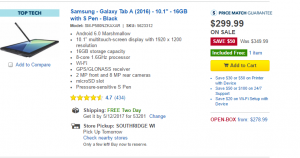 The best, most reasonably priced Samsung tablet with the widest range of features is the, Samsung- Galaxy Tab A (2016). It has a 10.1-inch display, 16 gb of storage, an S pen, and an 8-core processor. If you can’t get work done on this tablet you need to change your line of work. This thing SCREAMS performance.
This tablet is $300, simple math will tell us, that for the devices alone the total cost thus far is: $17,100.
The next step is to figure out what applications and programs the employees are using, so we can be sure to upload those to these new devices. The easiest way to do this is to have someone literally ask each person what they use. Compile the list and you are all set. Once you have all that figured out you can then start testing the plan that is in place.
In this step, we will be launching our pilot devise. You add all the apps that every person uses onto this device. In this phase, we will be testing each device to make sure the applications work to the best of their ability and will meet the requirements for a successful mission.
If everything works out on the pilot device you are now ready to implement the method of distributing all the new Samsung Tablets. Figure out the plan and execute it so all 57 people who need the device, have the device. Now, you can make sure you have the correct apps and programs for each individual person. This should be written down, now you will be able to make any changes to the employment post-process by quickly fixing anything that went wrong in the pilot program.
At this point we get a better picture of how much time this is going to take. Manually uploading the software to all 57 devices is time consuming. However, there are programs out there where you can push updates through the devices themselves. This may save a lot of time and therefore money.
Once we figured out all the costs we need to put everything together in a spread sheet. Each phase needs to have a start date and end date with the number of hours and costs associated with each phase. Below you will see my example.

So, as you can see this is very adaptable to any scenario you are covering or wanting to cover. My first sample task was to Document the number of devices, I felt that I could do that in 5 hours or less in this task I also felt it would be necessary to figure out what each the old devices were because it would give you a good idea on the level of computer literacy the individual may or may not have. For the cost of all these you are basically taking the wage of the person, or people who are working and multiply that by the number of hours they will be working. In task number two, you will be taking the wages and multiplying that by the number of hours, then you will be adding the total cost of the devices, which we said earlier was $17,100. I felt this task could get done in 6 hours. Task number 3 was to create a pilot upgrade device, with the new operating system installed. I figured 3 hours for this, this new tablet is very fast with an 8-core processor. To calculate this cost, it would be wage multiplied by the hours. For step 4 it was to install existing applications on to the pilot device. This is simple and would only take 2 hours. The cost of this task would be wage multiplied by the hours and adding the cost of any new software you had to purchase. The 5th task was to verify compatibility of the applicants on the new OS. It would take less than 1 hour to do that. To calculate this cost, it would be the wage multiplied by the hours. Task 6 was to remediate issues with the applications (make changes to make apps work). In this task, if you planned and did everything correctly it shouldn’t take very long. 2 hours for this to get done. The cost would be wage multiplied by the hours but also adding any cost that the changes incurred. Such as a new software that wasn’t mentioned that we didn’t have the licensing for. If for some reason the applications needed to be upgraded to be compatible with the new device. These things can add expenses. Task 7 was to create a migration plan. 1 hour to do this and the cost would be the wage multiplied by the hours. The migration plan should have already been thought of or the knowledge at least. Task 8 is the most time consuming and other than task 2 the most expensive task in the entire project. This task is where you execute the migration plan. For this one I said 24 hours. It is always best to overestimate your time than under estimate. For the cost of this project it would be the wage multiplied by the hours. The 9th task is to support the devices/users that still have issues. The best way to go about this is providing a ton of support. With new devices and new software comes a tone of “problems”. People will want to be able to have support for a while until they get acclimated to the new devices. For this task, I figured 10 hours was enough total hours to provide support. The cost of this task would be wage multiplied by the hours. The 10th and final task is to close the project. Here is the time to reflect on things you did right, things you did wrong, and how you could have improved. This will help you become a better project manager in the future. Employees like people who can grow, admit their mistakes, and move on to bigger and better things. GOOD LUCK!