People are unique creatures who express emotions everyday.  We communicate through our emotions to show how we are feeling, giving off negative or positive emotions, which will effect other people emotions on day to day basis. Either walking down the street with a smile on your face saying, ‘Hi’, to your neighbors or, being in the middle traffic carrying road rage shouting at the car in front of you for being to slow; emotions are being transferred and then absorbed. Some would say that we as human being are tapping into our emotional intelligence. Being able to key in on on your emotional intelligence will dictate how our day will begin and how it will end. 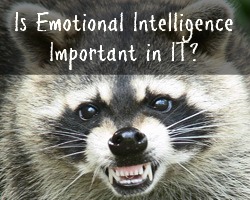 Emotional intelligence plays a key factor in a IT support specialist profession. Being able to utilize emotional perception, control, and evaluation will determine the final outcome of customer service satisfaction. People have problems with technology everyday . With those problems come frustration, discontent, and despair about the technology they are using. When people have these emotions they need someone to rectify the problem, and suppress the emotions that they are feeling.

A IT support specialist come into a situation where an internal employee approaches him/her with a problem about their computer not working properly. The IT specialist can see the person’s physical tone and facial expressions, and kind of get a perception on how the person is feeling without even projecting a word. The person expresses verbally on how very frustrated and angry about the computer failure to work properly. By just asking questions concerning the situation and getting to the core of the problem. The IT specialist can then make the person feel like a priority, and by being understanding and recognizing these physical,verbal, and emotional cues, the IT specialist can then manage the appropriate serene approach to the situation.