Taking the precautionary steps to prevent any sort of malicious content plaguing your computer is absolutely critical.  From personal experience, working on family computers that is, this seems to be overlooked quite often.  In all honesty, if you’re computer literate that is, not having an antivirus installed isn’t the end of the world.  When I built my computer in 2012, I went without any sort of antivirus program for almost 2 years.  Everything went without a hitch until one day I was attacked at a personal level.  To this day, I’m not entirely sure how they gained access to my computer. I looked pretty in depth to find answers, but hit brick walls every turn of the way.  The non-official consensus is some sort of phishing attack.  Staying up late at night, sleep deprived, I most likely clicked on a link that was just one character off from the real website URL, and BAM, my information is scattered for all to see.  After extensive cleaning, I started looking into free antivirus software, and narrowed it down to three reputable options.

MS Security Essentials was the first piece of software my friends directed me to.  It’s completely free of charge, and very dependable.  Considering it has been developed by the creators of the OS I was using, it seemed like a good bet.  The interface is relatively streamlined and easy to understand quickly.  It looks for the most basic of threats, and actually detected several registry issues when I first installed it.  I still have it on my computer after several years, and I don’t plan on upgrading to anything else in the foreseeable future.  Once again, I am incredibly cautious about what type of traffic I allow on my machine after the mishap in 2014.  This is a good antivirus for any home PC, but being proactive against putting yourself in compromising situations is invaluable compared to any antivirus program out there. 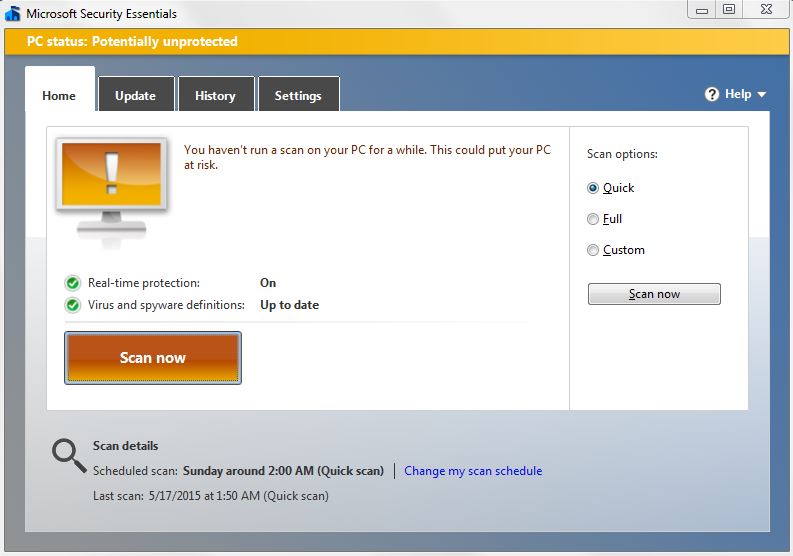 Another program I stumbled upon was Panda Free Antivirus.  At the time, it was the 2015 version, but they are relatively the same.  This software is far more extensive in protection when surfing the web.  It actively provides information about every website you visit, and will alert you immediately when malicious code is detected.  It is a pretty orthodox antivirus program, but it is easily in the top three of free antivirus programs.  This package includes Phishing protection, On-Access Malware scans (when accessing websites) and On-Demand Malware scans (manually started) and malicious URL blocking.  All of these work seamlessly, but you have to remember these are all free programs.  They will do the bare minimum to keep the computer safe, and there will inevitably be viruses that can’t be detected.  This is done to invoke upgrading to the premium versions of these programs.  With that being said, there is no premium version of MS Security Essentials, so there is no fiscal influence in the creation of it.